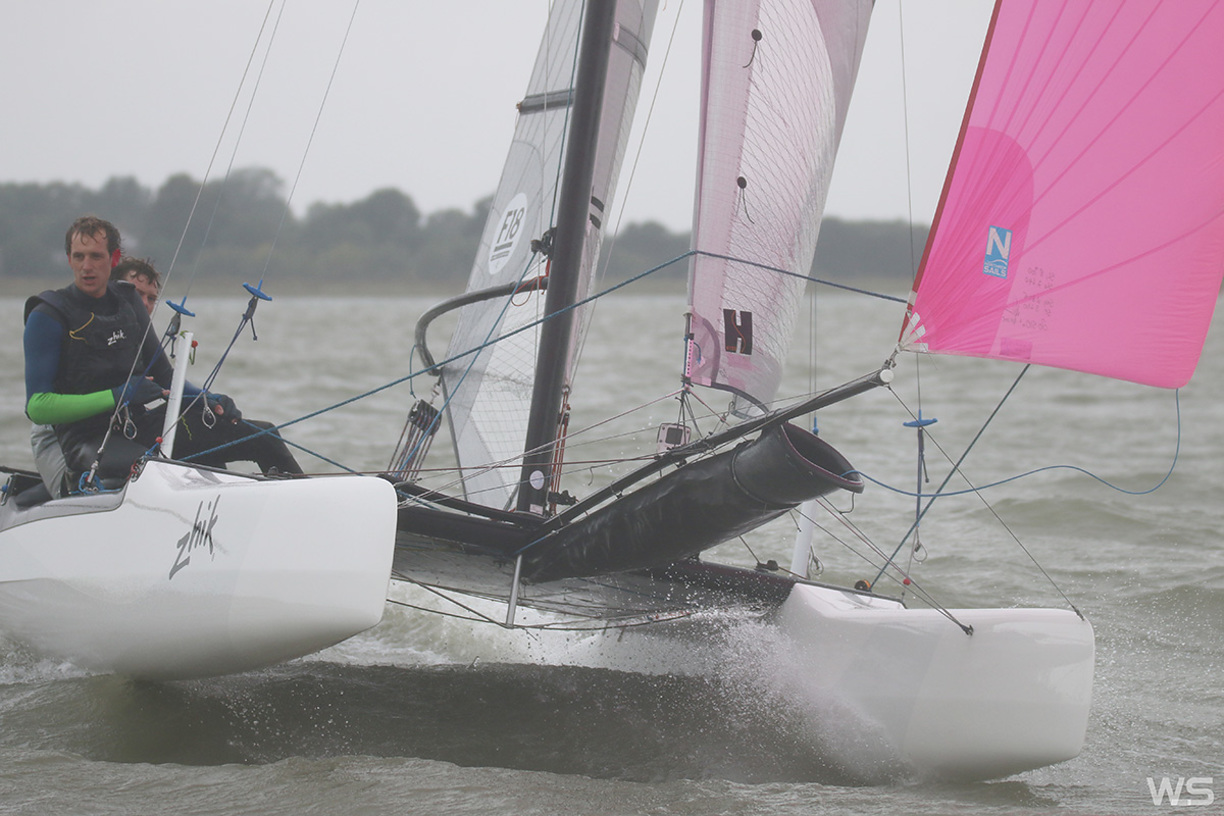 Big Wednesday of Pyefleet Week, sponsored by AOC and Just Trays, is always a special feature of the hugely popular dinghy racing week, but this year's edition more than lived up to it's reputation for great racing and partying.

The day offers a midweek break from the pressures of series competition with a special one off trophy race for the Gold Medal Trophy, which was presented to the club in honour of two of it's most famous and successful members - the late Reg White and his crew John Osborn, who won Olympic Gold in the Tornado Class at the 1976 Kingston games. Reg was a lifelong member of Brightlingsea Sailing Club and John remains a member to this day, and their families presented the Gold Medal Trophy in their honour and personally help to run the special celebration BBQ and party which follow the race each year.

As had been forecast, the weather was anything but summery with driving rain and very strong winds. But Brightlingsea Sailing Club is renowned for producing some of the best dinghy sailors in the world, so whilst some competitors chose to enjoy a welcome lay-day, the leading teams all rigged and hit the start area.

Big Wednesday Race Officers Craig Bond and Alan Hicks set a special course to keep the fleet relatively close to shore and 32 boats came to the line, ranging from a Laser 4.7 and RS Aero 5 at one end of the spectrum up to an F18 and a foiling Moth at the other. Even before the start conditions were pretty lively and the wind built throughout the race from low to mid twenty knots at the start up to 30 knots towards the finish.

Whilst a few of the teams suffered gear failure or decided to retire as the conditions worsened, 22 boats flew round the course and made it home with ear to ear grins on their faces. Anyone who finished the race deserved a medal, but at the special prize giving the podium finishers were confirmed as Piers Lambert and Tim Bees sailing a Merlin Rocket in third place, Pete and Tom Kyne sailing a Fireball in second place and winners and recipients of the Gold Medal Trophy Rupert and Freddy White sailing an F18. The Gold Medal Trophy and its associated keeper prizes, which were specially created by Brightlingsea artist Olivia Goddard of Little Boat Gifts, were presented by Peter Cheshire of sponsor AOC.

Rupert and Freddy are the grandsons of the late great Reg White, and the sons of Robert White, who is himself a double Olympian representing Britain in the Tornado in 1984 in Los Angeles and 1988 in Seoul. Rupert is currently vying to represent Britain in the Nacra 17 at the Tokyo 2020 games with crew Kirsty Irwin.

With the prize giving completed it was BBQ time. Cooking for 400+ people is never an easy task, but the White family have it mastered and despite those running the grills looking more like they were taking part in a southern ocean race leg than cooking a BBQ in August as they were lashed by driving rain and a half gale, a delicious dinner was miraculously produced.

After dinner a draw was held for the Big BSC Pyefleet Week Raffle in aid of the Sir Thomas Lipton Foundation's Buoyed Up scheme, which brings sailing to underprivileged children. Sir Thomas Lipton had close ties to Brightlingsea as his America's Cup skipper Edward Sycamore and many of his crew hailed from the town and BSC has been an active supporter of the scheme for some years. Amazing prizes had been donated by local artists, companies and individuals and £555 was raised for this terrific cause.

With the raffle over and the dinner tables cleared away the obligatory dancing, which this year was to SKA music tribute band Skamite, commenced and before long everyone was on their feet. As we write this report the partying is in full swing and no doubt will continue for some time to come!

The forecast for the remaining two days of competition are for continuing strong winds and so all fingers are crossed that it will be possible to complete the remaining races. Pyefleet Week 2019 will continue until Friday 16 August with a total of five series races planned for each group.