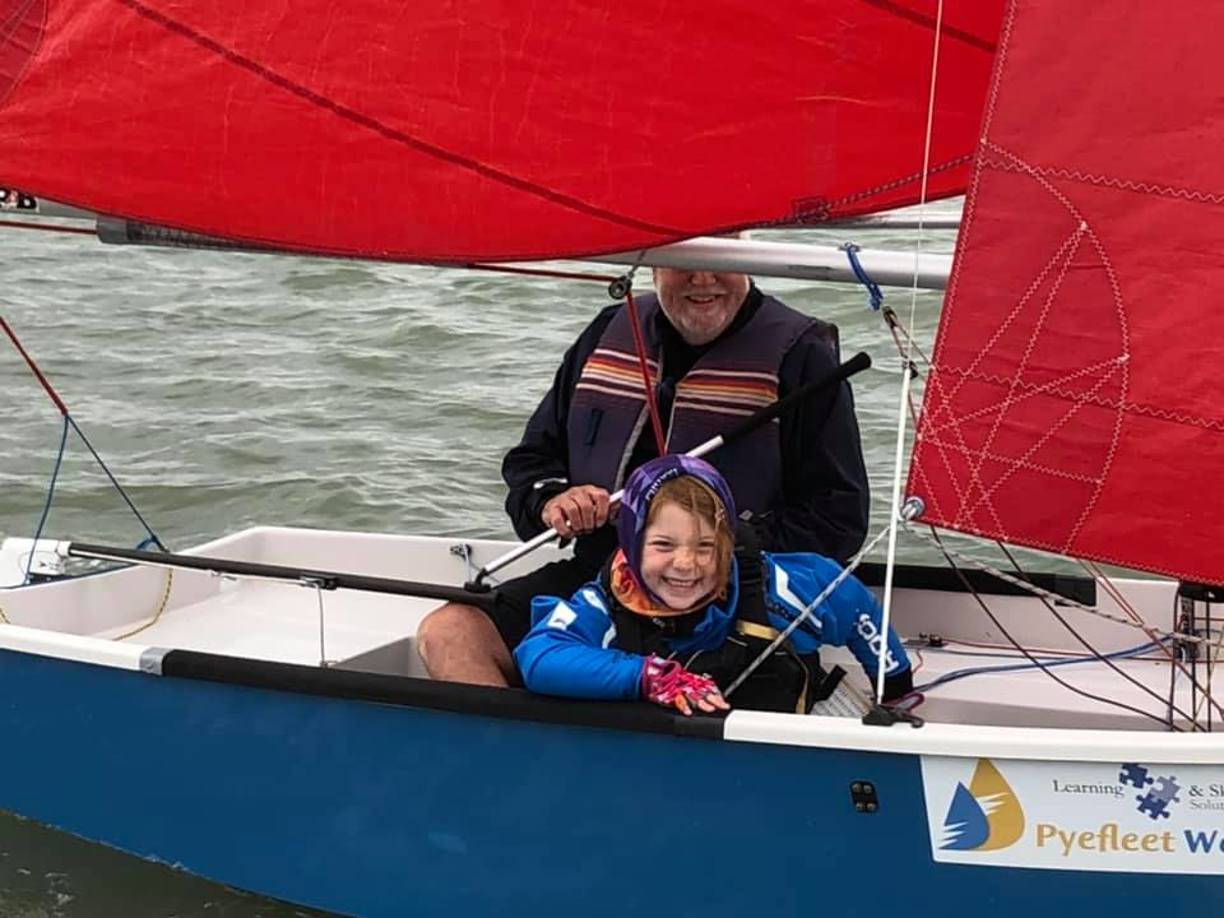 After a weekend of gales that caused the cancellation of both the warm up race and the planned opening day of competition, Brightlingsea Sailing Club's ever popular annual Pyefleet Week got underway on Tuesday 12 August 2019 in extremely light airs and under grey skies. It was to prove a very difficult sailing day with the wind rarely getting above five knots and shifting constantly. To add to the 135 competing teams' travails, regular light showers swept across the race area too.

Featuring a mixture of dinghy and traditional day-boat classes, Pyefleet Week is very much a family affair. It combines great sailing for both experienced and novice racers and a fun shoreside programme of activities and social events. It retains the atmosphere of a good old fashioned family sailing week with a strong focus on youth sailing.

Brightlingsea Boat Park & Ride Monday was also Family Fun Day and included a host of great shoreside activities for the youngsters such as entertainment and magic shows by the award winning Magic Olley, a session of the infamous Pyefleet Pirates for the very young children and an evening of karaoke and disco for kids of all ages.

Afloat the fleets are traditionally split into two groups, with one racing in the morning and the other in the afternoon and the fleet start times alternating each day. Race Officer Dave Gibbons and his team had hoped to catch up yesterday's missed race for the Red Group by running two races in the morning session, but the light airs made this impossible and even the race that did take place had to be shortened as the breeze died away completely for a time. Conditions remained light for the afternoon Blue Group races, but the wind was very slightly stronger and more consistent, allowing all the boats to complete a full course.

The first fleet to get underway from the committee boat start line in the morning was the Parent & Child Handicap, in which the younger children race with a relative or family friend. Putting in an impressive performance despite the light airs were father and son David and James Herbert sailing a Sprint 15. In second place was Mirror World Champion Clive Goodwin sailing a Mirror with daughter Zoe, and the RS Feva XL of Matt and Charlie/Bonnie Keeling was third.

The River Colne is very lucky to have not one but two historic one design classes and next away from the line were the 14 foot long clinker built Wivenhoe One Designs (WOD). The five competing boats are closely matched and enjoyed great racing despite the very light conditions. Ultimately Nigel and Peter Cook sailing WOD1 Alcyon, the oldest boat in the fleet built in 1935, claimed victory from WOD17 Elsie sailed by Rob Maloney and Nick White, and WOD6 Duet sailed by George Brown and David Tournay.

Following the WODs off the line were the other local one design fleet, the 18 foot 1928 Robbie Stone designed Brightlingsea One Designs which this year has 16 entries. With their big bermudan rigs, specially optimised for sailing in the confines of the River Colne and it's creeks, the fleet is always a spectacular sight and they didn't disappoint today as they worked constantly to keep up with the shifting wind and avoid the periodic light patches. Celia Charlton, at the helm of C30 Sarah Louise, got a great start and led the fleet from the first mark. Despite multiple challenges she held her lead for four of the five legs raced and was only passed on the final approach to the shortened course finish line by C32 Avocet helmed by British Tornado Olympian (1988 Seoul) Jeremy Newman, and C27 Rebel helmed by Sonata and two time J97 National Champion crew Chris Matthews.

In Handicap Class 3 the Solo of Pete Kyne took a convincing victory from the Scorpion of Simon and Fiona Gallow from Chipstead Sailing Club with Bowmore Sailing Club's Rachel Jenkins' RS Aero 7 in third.

Back at the club line which is located in Brightlingsea Creek the Cadet Handicap went to Bowmore Sailing Club's Katy Jenkins sailing an Optimist. Second and third came down to an inter-family Optimist battle which was narrowly won by Amelie Hiscocks who beat brother Louis Hiscocks, both sailing for Weymouth & Portland National Sailing Academy. Ed Eeles sailed a great race in his RS Tera Pro to take fourth place

With the morning races completed the sailors returned ashore to take advantage of the legendary Pyefleet Week lunch table, after which the Blue Group went afloat to take their turn in the wind lottery machine.

First off after lunch was the RS Tera fleet which welcomed a number of visiting sailors as Brightlingsea will host the 2019 RS Tera National Championship at the end of August. Brightlingsea's Blake Tudor, Harry McTiernan and Ed Eeles were given a serious run for their money by visitor Felix Powell from Orwell SC and the final placings were only decided on the last run to the finish. First place went to Blake Tudor with Harry McTiernan second, Felix Powell third and Ed Eeles fourth.

Another fleet very much aiming to encourage the youngsters to start and improve their racing is the Mirror fleet. Sailing their second race of the day Louis Hiscocks helmed mum Melissa Heppell to race victory from mother and daughter Bryony Goodwin and Kaya Nawrot. Bryony's brother Clive Goodwin and his daughter Anna took third place in the Mirrors.

The Laser and Laser Radial fleets start together but are scored separately. In the Lasers Todd Grady beat Richard Herbert and Steve Williams, while in the Radials victory went to Alexander Clarke with Joshua Davies second and Brooke Hastings third.

The final fleet to start was Handicap Class 1 which includes the cats. The light airs were particularly painful for these high performance boats, but Paul Mines and Stuart Smith made the best of it in their Tornado, beating Steve and Clare Corby's Hurrican 5.9 and the RS808 of Tom Kyne.

After gales followed by a near flat calm, the forecast for Tuesday's second day of racing finally brings hope of some nice medium airs sailing with westerlies of 12 to 18 knots promised. The programme for the morning session has been modified to allow the Blue Group to sail two races with a first start at 10am, and the afternoon Red Group session will commence 30 minutes later than published at 3pm.