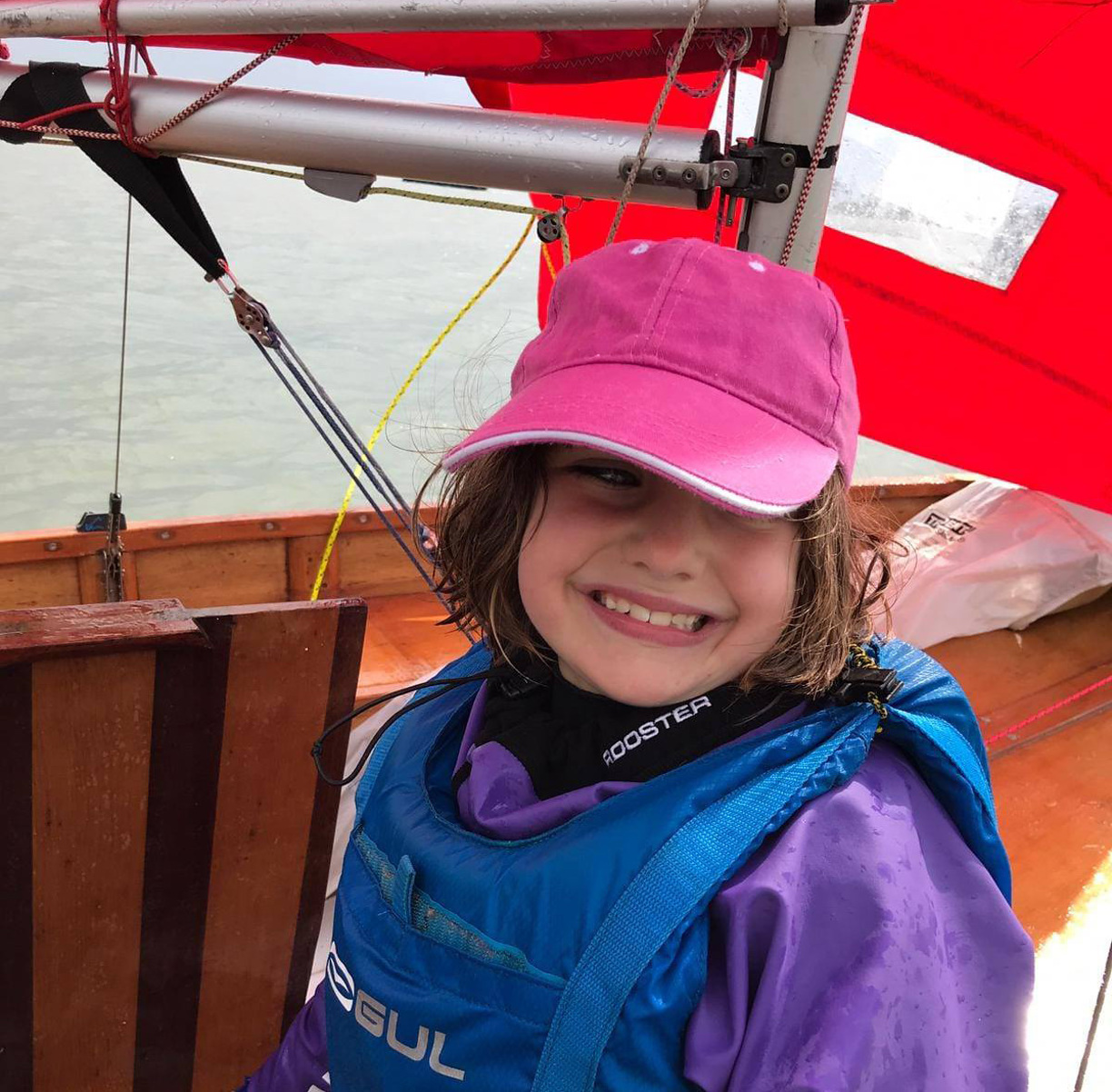 Tuesday of Pyefleet Week 2019 dawned warm and sunny with a great sailing breeze and the race committee took full advantage of the conditions kicking off the day with two back to back races for the Blue Group fleets, races two and three of the five race series, to get them back on schedule and make up for Sunday's lost race.

With the tide high and the wind conveniently in the west-south-west the decision was made to run the Blue Group races from the club start line in Brightlingsea Creek. With a weather mark laid off Mersea Stone the fleets made a spectacular sight close tacking away from the line in front of the many spectators lining the beach and promenade.

After a quick lunch break it was the turn of the Red Group to take to the water. By the 15.00 start time the wind had increased and clocked to the east-north-east, the sun was still out but a regular stream of darker clouds brought regular strong and shifty gusts to keep everyone on their toes.

After the difficulties of first strong and then extremely light winds earlier in the week this was a welcome return to classic east coast summer weather and everyone returned ashore with grins on their faces. For some though it was a tough day. A number of competitors elect to race in both Red and Blue Groups and for them doing three races in a day was fun but exhausting. Cheryl Jessop, who this week is crewing in both an RS800 and an RS400, summed up the situation succinctly saying "It was great racing but it was really tough going with the kite in that last race. My arms are so tired I can barely lift my pint!"

In the RS Tera fleet Blake Tudor claimed his second and then third victories of the regatta to put him into a five point lead over his nearest rivals. Those rivals are Harry McTiernan who added two second places to his fourth of race one, and Felix Powell whose two thirds go nicely with his second of the opening day, putting both boys on eight points and in second and third respectively on count back.

The only Blue Group fleet is wasn't possible to run two races for was the Mirror fleet. But the single race that did complete was a real humdinger. Mirror World Champion Clive Goodwin and his daughter Anna took race victory from Stephen Heppell crewed by granddaughter Josie. Young Louis Hisocks, son of British Oympic 49er Gold Medallist Simon, is helming this week with mum Melissa, herself a Ladies Mirror World Champion, in the front of the boat. Clearly Louis has inherited his parent''s sailing abilities as he confidently sailed them into third place. In the overall standings Clive and Louis are now tied on points with Stephen and Josie two points behind them in third.

In the Slow Handicap the competition between Oscar Oldfield and Tom Philips and Katy Jenkins and Amelie Hiscocks in their RS Feva XLs is fierce. Each team claimed a race win and a second place today which leaves Oldfield and Philips with the overall lead by a single point from Jenkins and Hiscocks. Andrea Gibson sailing a Topper add two more third places to her card and remains in third overall.

In the Lasers Steve Williams found the fresher conditions much to his liking winning both races from Mark Schofield with Dave Herbert third in both races. Unsurprisingly these three are now the overall fleet leaders.

In the Laser Radials Joshua Davies and Alexander Clarke claimed a win and a second place apiece which puts Joshua Davies into a single point lead from Clarke with Brooke Hastings, who scored a third and fourth, rounding out the top three overall.

Pete Kyne dominated the Solo fleet winning both races. Paul Aldridge and Dave Youngs followed him across the line in the day's opener and in race three it was Youngs second with Robin Page third. Overall Kyne leads the fleet by a single point from Youngs with Aldridge third.

The fast boats of Handicap Class 1 were hugely relieved to finally have some decent breeze and it was the RS800 of Dave Conlon and Ed Gibbons that came to the fore initially with fellow 800 sailors Ben Clegg and Abi Kay second and Pete Purkiss in his RS700 third. In race three Clegg and Kay got the upper hand with Purkiss second and Chris Matthews and Ali Hinds RS800 third. With three of the five schedule races the discard comes into play which was good news for Tornado sailors Paul Mines and Stuart Smith. They went into the day leading and took a fourth in the first race of the day, but then went on to come eighth in race three, a score the immediately discarded. In the overall standings Clegg and Kay lead by two points from Mines and Smith who are on equal points with Purkiss but claim second on countback.

Father and daughter Stephen and Morgan Cross sailing a 2000 won the Parent & Child Handicap, with Clive Goodwin, back in his Mirror for his third race of the day but this time with his daughter Zoe, second and Matt Keeling crewed by Charlie and Bonnie Keeling third. Overall Clive and Zoe continue to lead the fleet by two points from Team Keeling with Stephen and Morgan in third.

The Wivenhoe One Designs enjoyed a great tousle which was eventually won by George Brown and David Tournay with Nigel Cook and Julie-Anne White second and Rob Maloney and Nick White third. Overall Cook now leads the fleet by a single point from Brown with Maloney one further point back in third.

The spectacular Brightlingsea One Designs had an incredibly tight race. The start was full of drama including a collision which saw Phil Rust doing penalty turns just after the start. The fleet was nip and tuck all the way round the course with constant place changes. In the closing stages Jeremy Newman, Stuart Philips and Pete Nichols just managed to sneak past Malcolm Goodwin, Derick Gentry and Joe Harman for first place. Rust, crewed by his brother Mike and Tania Bines made a superb recovery from their start line distaster to take third place. Overall Newman's second win of the regatta gives him a five points lead from Goodwin. In third overall lies Chris Matthews who had languished in mid fleet for the first half of the race before managing to pull up into sixth on the long reach back into the creek.

In Handicap Class 3 Pete Kyne was back out in his Solo again and took a second win from the Scorpion of Simon and Fiona Gallow from Chipstead Sailing Club, with Ben Powell in his RS Aero 7 third. Kyne continues to lead the fleet overall from the Gallows while third place is now filled by the RS200 of Tom Taylor and Mimi Thomas who finished fourth in the race and now hold equal points with the Gallows, only taking third overall on coutback.

The Merlin Rockets dominated Handicap Class 2 with Piers Lambert and Tim Bees beating Dave Conlon and Sarah Bines while Alan Carter and Dave Pannell took third place in their Fireball. These three boats now lead the fleet overall with Lambert and Conlon tied on four points and Carter two points behind them.

Bowmore Sailing Club's Katy Jenkins sailing an Optimist took her second race win in the Cadet Handicap to consolidate her overall lead. Brother and sister Louis and Amelie Hiscocks, also both in Optimists, had another great fight for second place and this time it was Louis who managed to gain the upper hand with Amelie third. Louis and Amelie are now tied on five points, three points behind leader Jenkins.

Brightlingsea Sailing Club is one of those rarities - a club that is still entirely volunteer run. Whilst the racers are hard at it on the water, an equally dedicated band of volunteers are slaving away in the galley to keep everyone fed and watered. Tuesday's post racing food offering was the ever popular Pyefleet Week curry, which was declared to be particularly delicious this year. After supper Games Night got underway featuring a host of traditional team fun and games plus a few inventive new games, the rules of which are still being debated.